Altitude Comedy Festival is delighted to announce that one of the UK’s greatest comedians, John Bishop, is back again to headline Altitude’s 10th birthday celebrations in the chocolate box surrounds of Mayrhofen, Austria this coming January. And that’s not all! We also have Katherine Ryan, Beardyman and Alex Edelman heading down to clowntown to join our most incredible line-up ever, for an amazing five days of action enjoying slopes all day and laughs all night!

John Bishop had such a brilliant time headlining Altitude 2012 that he asked to come back and do it all again in 2013. How could we possibly refuse? Having totally destroyed Mayrhofen, both on and off the stage for two year’s running, we’re are over the moon that the Bish is back to do it all again for our 10th birthday celebrations. One of the UK’s biggest and best comedians, John has been blazing trails both on the live circuit, and on the TV, presenting the Royal Variety Performance and with his own prime time BBC One spot for The John Bishop Show. Seriously in demand, John can sell out arena tours at the drop of a hat, but this is your chance to catch him up close and personal in the intimate venues of Mayrhofen. Whatever you do, don’t miss out.

Also joining Altitude’s gargantuan 10th birthday line-up is queen of the acid putdown, Katherine Ryan. Currently host of BBC 2s Hair, London-based, Canadian, Katherine may have come to wider public attention with a string of acerbic appearances on Mock the Week, 8 out of 10 Cats, QI and Have I Got News For You, but she made her name by being one of the best stand ups around. Viciously funny, she’s not afraid to take deadly aim at highfalutin celebs, or to let you know just how disastrous her taste in men is. Shockingly good, if you like it near the knuckle, then Katherine’s for you. 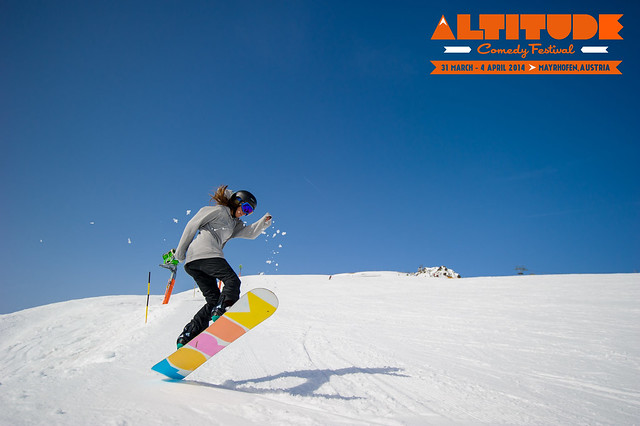 A veteran of the festival scene, Beardyman knows how to get a crowd bouncing. One of only two acts to have won the UK Beatboxing Championships twice, Beardyman, or Darren to his mum, has racked up tens of millions of YouTube hits for his revelatory skits that take vocal gymnastics to the very limit of human possibility. From dubstep, techno and reggae, to impersonations of Elvis dressed as a monkey and his viral smash Kitchen Diaries, Beardyman’s set is an unpredictable smorgasbord of hilarious madness that is guaranteed to blow you away.

And finally, for now, we’re over the moon to announce Alex Edelman will be back in Mayrhofen for our 10th birthday. Always a huge hit with the Zillertal crowd, Alex’s east coast-based observations on cultural identity have earned him the admiration of the comedy big boys and won him 2014 Foster’s Edinburgh Comedy Award Best Newcomer gong. Deceptively mellow, Alex hits his targets with pinpoint accuracy and is definitely one to catch before his certain rise to the really big leagues.

With some of the world’s greatest comedians, including Jim Jeffries, John Bishop, Sean Lock, Michael Mittermeier, Marcus Brigstocke, Andrew Maxwell, Katherin Ryan, Steven K Amos, and many, many more across five fun-packed days in Mayrhofen, one of Europe’s most picturesque ski resorts, Altitude’s 10th birthday is set to be totally legendary, so book your tickets now, before it’s too late.

THE VIP WRISTBAND WILL ENTITLE YOU TO:

Performer Quotes:
“Incredible, Go!” Jimmy Carr
“What a lovely gig…Thank you to all!” John Bishop
“I had a great time” Bill Bailey
“I loved every minute” Sean Lock

Press Quotes:
“There can be few nicer places to watch comedy than at the Altitude festival” Daily Telegraph
“Even if you’re useless at it [Skiing or Snowboarding], it’s still worth it for the après” Guardian
“Altitude festival is well, well WORTH A LOOK. We recommend it highly” Maxim
“The one thing to expect from Altitude is the unexpected – an utterly surreal experience” The Big Issue