Download Festival, the world’s premier rock event, has announced a further 23 acts including Slayer with their last ever UK show, The Smashing Pumpkins, Dream Theater, Lamb of God, Eagles Of Death Metal, and more. The three-day festival takes place 14-16 June 2019 at the spiritual home of rock in Donington Park, Leicestershire. Tickets are on sale now at downloadfestival.co.uk/tickets.

Metal royalty Slayer will be making their final UK appearance at Download 2019 after 37 years of mayhem. Their impact on musical culture cannot be overstated and fans should prepare for yet another legendary performance which will include a barrage of classics as they make one last celebratory sweep of Donington.

The Smashing Pumpkins will make their first appearance at Download Festival next year. The alt-rock and grunge legends have stunned crowds worldwide on their 30th anniversary tour and are as ageless and seminal as ever. Loud, quiet, dreamy, stirring and everything in-between – The Smashing Pumpkins debut Download performance is not one to be missed.

Prog-metal titans Dream Theater have been at the top of the game for 33 years. Having inspired countless bands along their storied career, their performance will be no less grandiose as they return to Download after a 10 year absence. They will be joined by the groove-laden modern metal heavyweights Lamb of God, as well as Eagles Of Death Metal, who invite fans to revel in all their rock’ n roll glory on their second ever Download appearance.

The prodigally powerful Maori-metal trio Alien Weaponry have carved their own sound somewhere between Sepultura and Silverschair and are in good company with the heavy-metal powerhouse Anthrax who will give fans a performance to remember. Brooding rockers Badflower are hotly-tipped after the success of their poignant, powerful single ‘Ghost’, and joining them are industrial noise-punks Black Futures who have been making seismic waves and will take the crowd on a trip of a lifetime.

Atlanta southern rockers Blackberry Smoke will be on hand to serve up a truckload of raucous country-infused good times. Detroit post-hardcore band I Prevail have proven that they are the real deal and will whip the crowd into a frenzy, and so too will Los Angeles natives The Interrupters. Ukrainian tech metallers Jinjer, led by their incredibly powerful frontwoman Tatiana Shmaylyuk, are also added to the lineup and will bring their all-powerful live performance to Download.

Man With A Mission are jumping on board with their pulse-racing hooks, riffs and giant wolf heads in tow, and are joined by fellow genre-melder nothing,nowhere. who has taken the world by storm with his hybrid emo-rap, pushing both genres forward as the most exciting force in the ever-growing scene. Our Last Night whose rapid rise to success shows no sign of slowing down are also added to the bill, as too are Riding The Low who are making the pilgrimage from Burton-on-Trent featuring Paddy Considine on vocals.

Swedish sensations Royal Republic will also join the Download 2019 line up alongside Pop-punk front-runners State Champs who’re fresh off the back of the release of their third album ‘Living Proof’. Rising Nepalese metal disruptors Undersidewill turn up the volume and are in good company with the well-oiled deathcore machine Whitechapel who will steam roll in to lay waste to the fields of Donington.

Australian up-and-comers Yours Truly will be flying in with a freight of huge choruses with them, and last but not least Floridian party starters Zebrahead are bringing the fun with no shortage of anthems and antics to get the crowd going.

Download Festival is the home of rock music and takes place on the sacred grounds of Donington Park, which have been associated with rock since the eighties. The festival attracts icons of rock to its main stage, plus some of the best and hottest new acts in the world. AC/DC, KISS, Metallica, Black Sabbath, The Prodigy, Rage Against The Machine, Slipknot, Linkin Park and many more have all headlined the main stage. 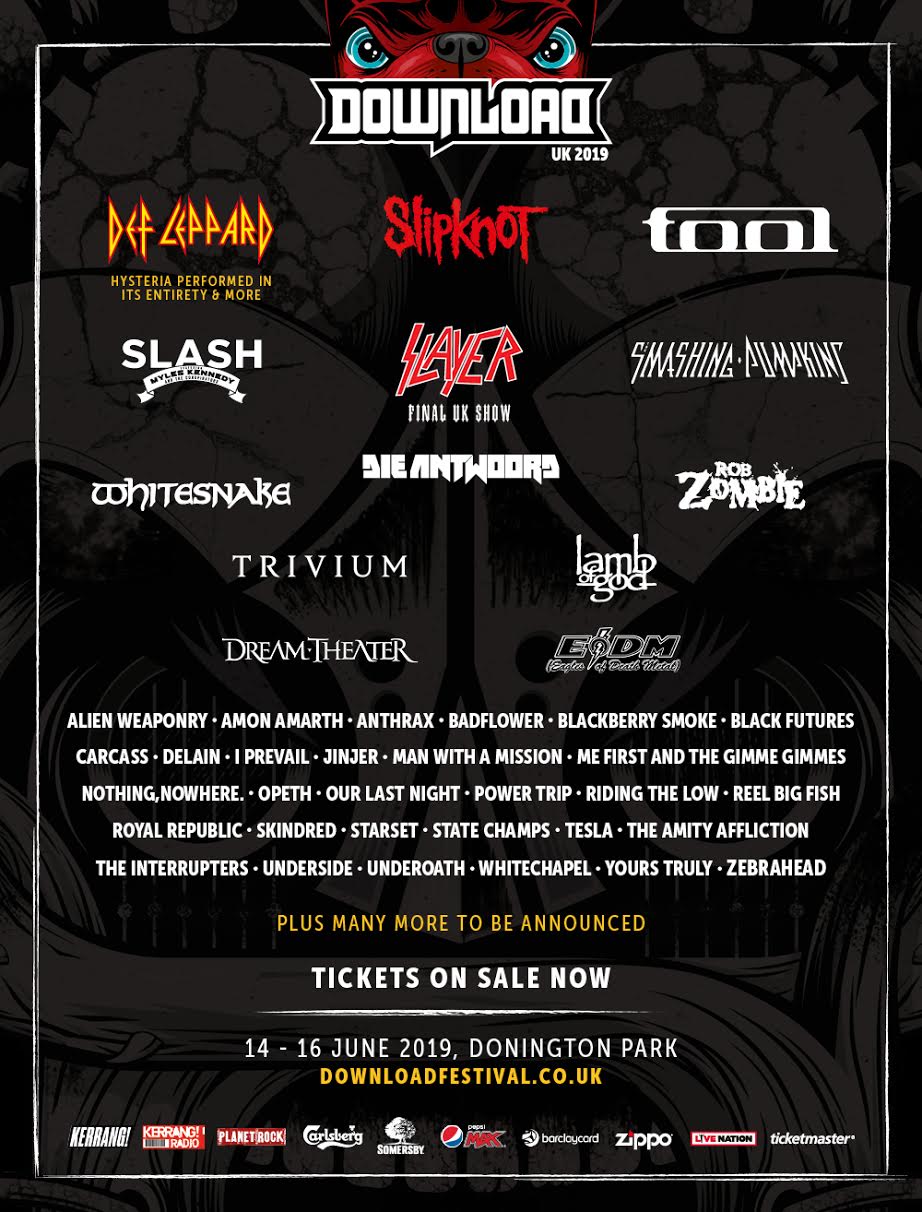