(LONDON, U.K. Monday 29 October 2018) – After thousands of sold out shows, it’s clear – Bon Jovi = One Wild Night. One of the planet’s biggest rock bands, Bon Jovi announced their return to the UK, continuing a triumphant world tour that has visited the USA, Canada, Brazil, Argentina and Chile and will hit Japan and Australia later in 2018.  A huge year of 80 shows and counting has also seen them inducted into the Rock And Roll Hall Of Fame. Their This House Is Not For Sale European Tour is set to be another blockbuster. Tickets go on sale on 02 November at 9 am at LiveNation.co.uk.

Bon Jovi will finish what they started by returning to Wembley Stadium in London, 19 years after they were the last band to play the old Wembley and 13 years since they almost became the first to play the new stadium – until overrunning building works put a stop to that.  ‘Who Says You Can’t Go Home?’ as the Bon Jovi hit goes…

Elsewhere in the UK, They will become among the first bands to play Liverpool’s legendary Anfield Stadium since 2008 in a city they last played during their seminal Slippery When Wet tour at the Royal Court Theatre in 1986.

They will end the tour at Coventry’s Ricoh Arena, where the band performed in 2006 and 2008 to acclaim.

“Those huge shows, tens of thousands of people all together as one, that’s what we do,” says Jon Bon Jovi, “And we’ve got a few things to put right by playing Wembley Stadium.  We were so excited to be the first band to play that new Stadium, I would have helped build it myself to make it happen. So we have a new history to write there. We’ve had some great nights at the Ricoh too.

“Throw in Anfield as a new venue – OK that’s just us showing off!  We’re honoured to play there and the first thing I’m doing is getting that iconic picture under the ‘This Is Anfield’ sign.”

The success of latest album This House Is Not For Sale, which debuted at the top of charts around the world, was the culmination of a tempestuous period in the band’s 3-decade history. A defiant statement, launched in a series of intimate shows in 2016 (including a memorable night at London’s famous Palladium), the album became the jumping off point for a new era for Jon Bon Jovi and his band.

And that band has evolved since their last global trip. 2013’s Because We Can World Tour, was their third tour in six years to be ranked the #1 top-grossing tour in the world (a feat accomplished by only The Rolling Stones previously).

This will be their first UK tour since 2013 when the band played 3 epic hours to launch the British Summer Time Hyde Park festival and headlined the Isle Of Wight Festival.

They will be joined in all UK dates by special guests – Manic Street Preachers.

The band now features Bon Jovi originals David Bryan and Tico Torres alongside Jon, plus longtime bassist Hugh McDonald, co-producer and co-songwriter John Shanks, multi-instrumentalist Everett Bradley and lead guitarist Phil X, who joined the band on that 2013 tour. All were on stage for an emotional set at the Rock And Roll Hall Of Fame induction to add to a momentous year.

“We’ve become a new, rejuvenated Bon Jovi,” says Jon, “A refreshed line up that kills every night. We sound better than ever and we’re enjoying every minute. We are out there as a band, feeding off each other and the fans, having the time of our lives all over again.”

This tour places the spotlight firmly on the music and the songs, the body of work that has propelled Bon Jovi to over 130 million record sales. The band is ready with a choice of around 95 songs that they can change up every night, but has also been playing all-time classics like “You Give Love A Bad Name”, “It’s My Life”, “Wanted Dead Or Alive”, “Bad Medicine”, “Who Says You Can’t Go Home”, “Keep the Faith”,  “Always”, “Have A Nice Day” and of course, “Livin’ On A Prayer.” Tickets go on sale on 02 November at 9 am at LiveNation.co.uk.

Tickets for Bon Jovi go on-sale to the general public on Friday 02 November at 9 am at www.livenation.co.uk 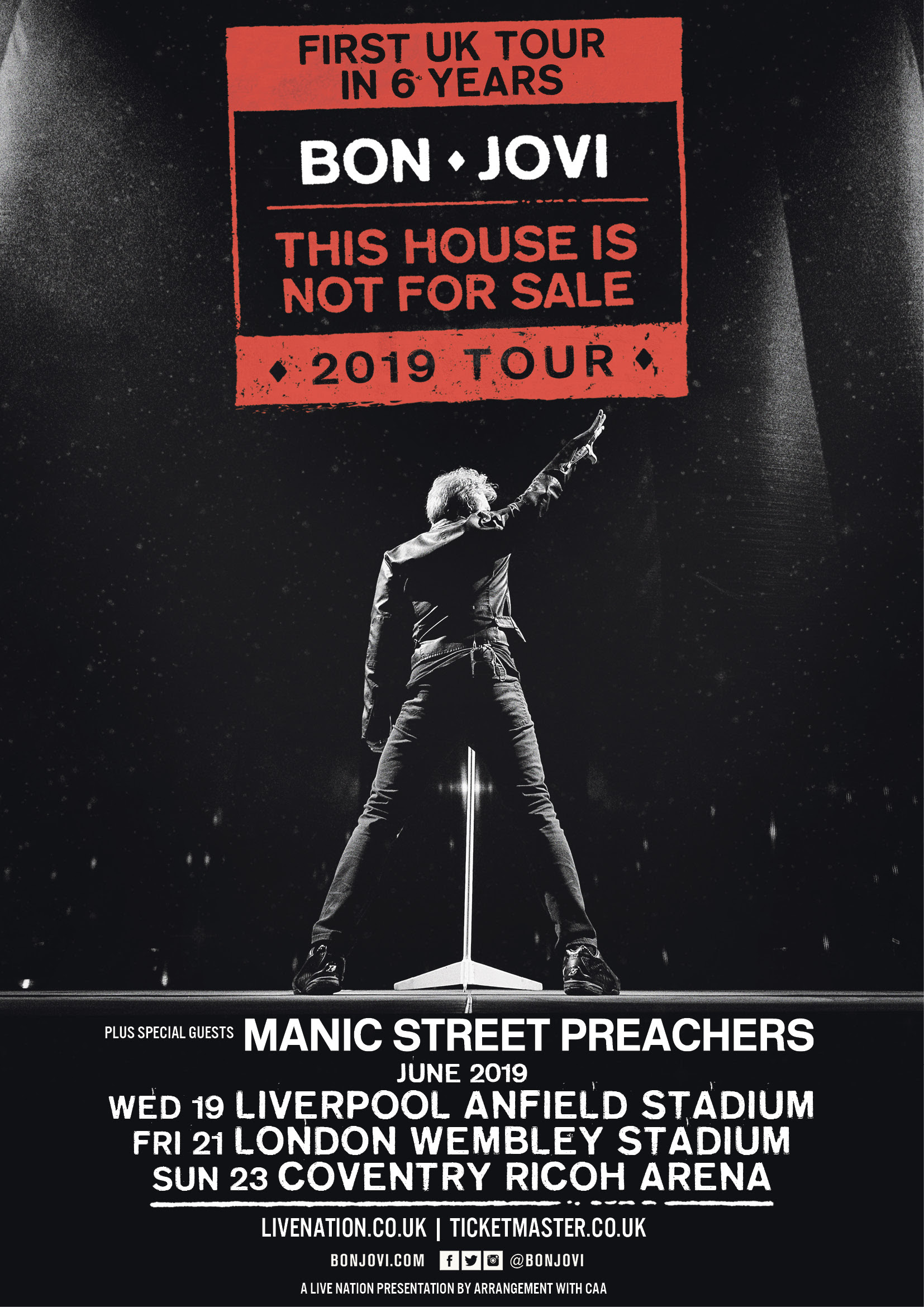 BON JOVIManic Street PreachersTHIS HOUSE IS NOT FOR SALE TOUR